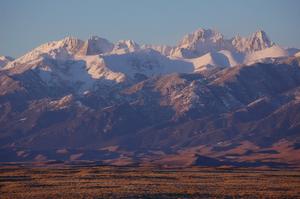 As part of the America's Great Outdoors initiative, the Secretary of the Interior requested a survey of the natural and cultural resources found along the Sangre de Cristo Mountains in Southern Colorado and northern New Mexico. A basic reconnaissance survey of significant resources was prepared by the NPS this fall and a draft report is in the final phases of preparation.

This PEPC posting includes a draft of the reconnaissance survey report and a summary of the survey findings.