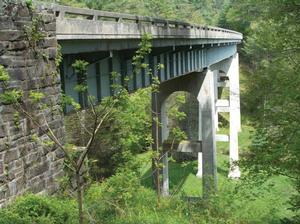 FONSI for FTP 2A16 and 2D17 Bridge Rehabilitation and Replacement


In accordance with the National Environmental Policy Act (NEPA), the National Park Service (NPS), in cooperation with the Federal Highway Administration (FHWA), is making available the signed Finding of No Significant Impact (FONSI) for the Environmental Assessment (EA) prepared for two NPS/FHWA bridge improvement projects. The FONSI was signed on August 12, 2019.

Project 2A16 would rehabilitate three historic bridges along the Blue Ridge Parkway while maintaining the historic character of the bridges to the maximum extent practicable. Project 2D17 involves the replacement of a larger historic bridge, Laurel Fork Bridge, which would be designed with consideration given to the historic character of the Blue Ridge Parkway and the original bridge. The bridges have been deemed structurally deficient with deteriorating decks and substandard height bridge rails. The proposed projects will address structural deficiencies and improve safety by meeting current roadway design standards, including installation of crashworthy railings.

Included as part of the FONSI: