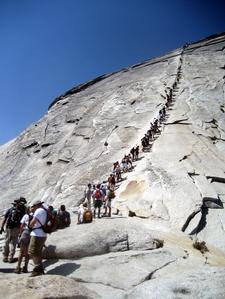 1. Protect the wilderness character of the project area
2. Improve the visitor experience on the Half Dome Trail by reducing crowding
3. Protect the area's natural and cultural resources
4. Improve the ability of its visitors to manage their own risk

Initial public scoping began on May 26, 2010 and ended July 9, 2010. All comments generated during scoping were considered as a range of alternatives was developed.

Alternative A - No restrictions

Alternative B - 400 people per day

Alternative C (300 people per day) was identified as the Preferred Alternative as it provides the optimum visitor experience while protecting wilderness character along the Trail. This EA presents an analysis of the potential environmental impacts of each alternative. Public, tribal, and agency consultation continues to play an important role in developing this plan.