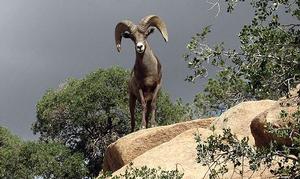 
U.S. Deputy Secretary of the Interior Michael L. Connor signed a proposed withdrawal application covering up to 22,500 acres of lands in the Eagle Mountain area.The Bureau of Land Management and the National Park Service are jointly working on the proposed withdrawal. The approval is the first step in the withdrawal process and initiates a segregation of the public lands that withdraws those lands from the operation of the mining and mineral materials law. The segregation is intended to preserve the status quo while the withdrawal process is under review.

The segregation of the public lands covered by the withdrawal limits activities to existing uses for a two-year period, pending an evaluation of the suitability of withdrawing and transferring these lands to the National Park Service. The two-year segregation has essentially the same effect as a withdrawal - it would prohibit new mining claims in the designated areas. Neither the segregation nor any withdrawal, however, would prohibit ongoing or future mining or extraction operations on valid existing claims.

The Federal Energy Regulatory Commission-licensed hydroelectric-pump storage project and associated right-of-way application for a transmission gen-tie line and a water pipeline currently under review by the Bureau of Land Management are not affected by the proposed withdrawal.

An official notice of the proposed withdrawal was published in the Federal Register on November 18, 2016, which initiates the two-year segregation period and begins the public comment period. Comments are due February 16, 2017. The Bureau of Land Management and the National Park Service will host a public meeting to gather comments related to the withdrawal process on on January 18, 2017 from 6:00 to 9:00 p.m. at UC Riverside Palm Desert, 75080 Frank Sinatra Drive, Palm Desert, California 92211.